Draw your own bohr model for dickson only

Atomic models are useful because they allow us to picture what is inside of an atom, something we will never be able to actually see. We’re going to talk about two models, the Bohr model and the Quantum model. While we know that the Quantum model is the correct way to represent atoms, the Bohr model is still useful for a very basic understanding. Think of it as a stick figure sketch of an atom. The parts are all there, its just not quite filled in all of the way.

Drawing the Bohr model for an atom gives you valuable information about the atom’s valence electrons. The valence electrons—those in the outermost energy level–are the ones that determine the chemical properties of an atom. In order to draw a Bohr model you must first use the periodic table to tell you the number of protons, neutrons, and electrons in an atom. For Bohr models we usually draw what the “average” atom for that element looks like and just round the average atomic mass to a whole number and use that for the mass number.

Steps for Drawing a Bohr Model:

1. Count the number of protons, electrons, and neutrons for that atom.

Each energy level in a Bohr model can only hold a specific number of electrons, as shown in the table below.

For example, here is a Bohr model for the average oxygen atom:

Here is one for phosphorus: 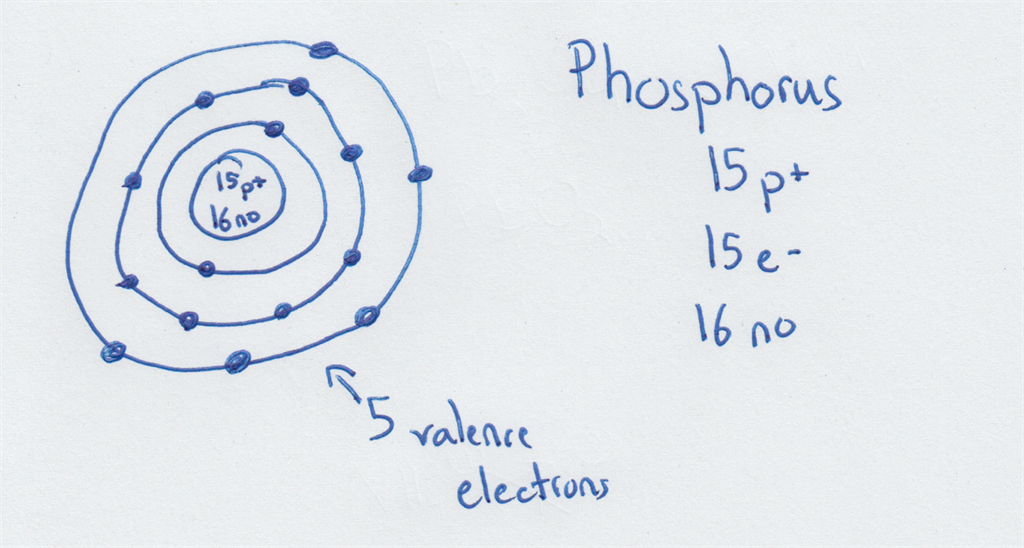 You try drawing one for Magnesium (Mg) and for Boron (B). Count the number of electrons on the outermost energy level to find the number of valence electrons. Check your answers by looking at the handout.

In 1925 the Quantum model of the atom was developed after it was determined that electrons can behave like a wave and a particle at the same time. In addition, you can’t know the precise location of an electron. Instead of traveling in orderly circles around the nucleus, we describe the electrons as existing in a three-dimensional electron cloud–a shape surrounding the nucleus. You will learn more about the Quantum model in chemistry.

These are some of the orbital shapes possible in the first two energy levels of an atom.

Draw a Bohr model for elements with atomic numbers 1-18 (Hydrogen thru Argon). Draw each diagram neatly, clearly labeling the correct number of protons, electrons, and neutrons for each diagram. Use the average atomic mass from the periodic table for the mass number (round to the nearest whole number). These can be drawn by hand and scanned or photographed, or can be drawn electronically. Count and label the valence electrons (those in the outermost energy level) for each diagram. Upload your diagrams and the answers to the two questions below here.

1. Look at your diagrams for hydrogen, lithium, and sodium. What do they all have in common? What group are these elements in on the periodic table?

2. Look at your diagrams for fluorine and chlorine. What do they have in common?

It took some time to achieve the product I was looking for, but we eventually got there. I do feel like a lot of hard work was put into this, and it even exceeded the page requirement. I'm pretty pleased overall. I give my thanks.

I absolutely love this writer! He/she always cranks out a fabulous paper and follows the assignment guidelines/instructions perfectly. Thanks again for always providing such quality work!!!

Outstanding job in writing my paper. I am always thrill to receive a well written paper that follows the instructions and the thorough details put into my paper. The quality of this paper is beyond awesome. Thank you so much.

The work has not been graded but I like the output that was submitted to me. Is it possible for the same pro to do the next assignment I will be submitting? If possible, I will greatly appreciate it.

Outstanding work! This writer followed every instruction and my paper came back with an A! I recommend to anyone needing help! Thank you again ❤️

They have a magnificent team. These people are always kind and willing to listen to your concerns or issues. Better yet, your assignment is always ready before the time, they usually send you a draft to double-check before they finalize your paper.

The writer is very fast, professional and responded to the review request fast also. Thank you.

Made 100% on both the outline and the paper. Quick turnaround time and my writer responded within 30 min or less. Any edits my instructor needed, my writer was patient and worked diligently to accomplish the task. Would recommend my writer to anyone!

Completed quickly and followed instructions given. Grammar, spelling, etc. was all good as well. Thank you so much! Will hire in the future.

Very friendly writer and support team. The writer followed all instructions and finished before the deadline. clear and well thought out.

Quick and efficient with tough assignment I had been struggling with for over a week. Would high recommend.

Was very helpful and good at keeping in touch when it came to progress on the paper. Will be requesting the service again.

The writer did an excellent job with my paper. I was a little curious because this was the first time using this website, but I am pleasantly surprised at the quality of the outcome.

Did an excellent job. Gave great updates and very satisfied with her work. Will definitely use again if I need services again.

My writer executes the assignment perfectly every time. His/her knowledge on formatting essays makes this stress-free every time. S/he truly is an all-star writer! Thank you!!

Very impressed!!! Received way before deadline with amazing results. Writer kept me up to date and had no problems at all. Will definitely use again

Perfect Writer did an excellent job following the instructions given and writting the paper to meet the grading criteria. The deadline given was meet way in advance and the writer made sure I was satisied with the paper. The paper was also of good quality. Job well done!

Both the writer and the customer service have tried their best to make me feel home here. Thanks.

By reading these well-researched answers, I have found the information covered in class easier to understand, and as a result, I will score higher on examinations.

Ugh, I had to use essaybynerd.com because another paper writing site didn't give my paper on time! But essaybynerd came through on time!!!! So happy to have ordered and will order again in the future!!!! 10/10!!

Followed everything that needed to be done. The paper came out just how I wanted! Super thankful

I like the writer writing Skills. Plus, I received my order way sooner than I expect, that’s a bonus. Awesome

This is a perfect work, thank you so much, and it is really above my expectations

Both versions are amazing thank you so much for your understanding and cooperation, 100/100

Thank you to the Support Team for finding me a more suitable writer under such a short deadline. Your customer support has been great.

Team support was great even when they had questions to clear up the instructions it all worked out and I received my assignments well before the due date! Thank you as always for the great work.

Excellent paper, Thank you for completed earlier than expected, God Bless You!

Very fast delivery and a very good writer! Always has great customer service and there for you 24/7. Thank you so much!!

Good job from the writer. Understood my exact guidelines and achieved the goal.

No words to describe this amazing level or writing. I'm really amazed that he managed to follow all the instructions without missing a single point in such small amount of time. Thank you so much for your hard work.

Keep doing what you do, I am really impressed by the work done.

thank you so much. That was written down so beautifully and you actually made me think and I undersood it more from you than from the professor...

Excellent research paper with all requirements met. Thank you kindly for the early completion. A+ Service by all involved.

This was a very well-written paper. Great work fast.

Seems to be exactly what I needed with minimal changes needed on my end. Was helpful.

I really appreciate the fact that you made the adjustments promptly. Thank you!

I love your product! I would recommend this to anyone. What a great find!

I receieved excellent customer support, and quickly. Thank you so much!

I needed a simple, easy-to-use way to add testimonials to my website and display them. Easy Testimonials Pro did all of that and more!

Calculate the price of your order

The price is based on these factors:
Academic level
Number of pages
Urgency
Basic features
On-demand options
Paper format

Delivering a high-quality product at a reasonable price is not enough anymore.
That’s why we have developed 5 beneficial guarantees that will make your experience with our service enjoyable, easy, and safe.

You have to be 100% sure of the quality of your product to give a money-back guarantee. This describes us perfectly. Make sure that this guarantee is totally transparent.

Each paper is composed from scratch, according to your instructions. It is then checked by our plagiarism-detection software. There is no gap where plagiarism could squeeze in.

Thanks to our free revisions, there is no way for you to be unsatisfied. We will work on your paper until you are completely happy with the result.

Your email is safe, as we store it according to international data protection rules. Your bank details are secure, as we use only reliable payment systems.

By sending us your money, you buy the service we provide. Check out our terms and conditions if you prefer business talks to be laid out in official language.

Enjoy 10% OFF today with the coupon code: best10